Actor Laurence Fishburne realizes that his character, Morpheus, did indeed survive the first Matrix trilogy. However, he is outspoken and adamant that Morpheus will not appear again in Matrix 4.

After being involved in what proved to revolutionize the sci-fi movie genre with the first movie in the Matrix franchise, the following two films in 2003 were less than overwhelming.  The third movie in the trilogy, The Matrix Revolutions, appeared to have wrapped up all its loose ends, with the deaths of both Neo (Keanu Reeves) and Trinity (Carrie-Ann Moss.) 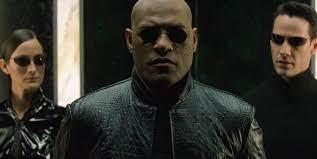 However, it is Hollywood, and if the studios think that the fans want another film and the possibility of making money is there, they will work their magic to get it done.  That is the case with the Matrix franchise, as in 2019, it was announced that Matrix 4, and not a long time rumored reboot, was officially in the pipeline.

With the official announcement of the coming Matrix 4 was the added news that several of those involved in the original film trilogy was, in fact, returning.  Back to both write and direct the sequel is Lana Wachowski.

Also reportedly returning are the two lead characters, portrayed by Keanu Reeves and Carrie-Anne Moss.  There has also been confirmation that Jada Pinkett-Smith will also be returning in her role of Niobe.

On the other hand, a fan favorite will not be returning.  Actor Hugo Weaving had already confirmed to fans that he would not be back for the sequel in his role of Agent Smith.  And rumors and speculations are swirling that the character of Morpheus is not returning either.

In a recent interview, Fishburne was asked about his character possibly returning for Matrix 4.  Fishburne confirmed that it would not happen, saying:

“I’m not involved, and you’ll have to talk to Lana Wachowski, and she’ll answer that question for you.”